When they decide you don't exist 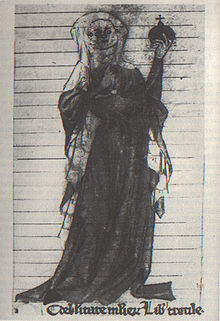 You’ve also written a handy little volume of cures and remedies, and given it the jaunty title De curis mulierum (“On Treatments for Women”).

What expectations might you have for your one-of-a-kind work?

As a professor at the Medical School of Salerno, you might hope that future classes would study it, implement its findings, and in time add to the body of knowledge it represents.

That’s kind of what happened to Trota of Salerno.

De curis mulierum was preserved, and several decades later scholars combined it with two other works on women’s health. That’s where it gets weird.

Trota was credited as author of all three works, even though she only wrote one. They called the compendium Trotula - “the little work of Trota.”

Fame and recognition beyond expectation!

Except … as time went on, confusion set in. Readers came to believe that “Trotula” was the name of the author.

Centuries later, in 1566, an editor decided to remove all mention of Trota or Trotula from the text, and attribute it to some made up guy named Eros instead. And pretend it was written in ancient Rome instead of the middle ages. Because why not.

Centuries after that, in 1985, another scholar unraveled the mystery of the Trotula - three authors, one of whom was a woman. Named Trota.

He also discovered another of her works. And now you are reading about her.

The fate of your work is outside your control, unpredictable.

If you’re hesitating to share something with the world, I’ll suggest you imagine that some scholar in the year 2639 attributes your work to a made up guy named Orville.

That sucks, but are you glad at least people are still interested in what you have to say? Better share it, then.