"... whatever you have to do to keep moving forward"

Today in the United States we celebrate Martin Luther King Jr. Day. Pundits from all over the political spectrum will gather on Twitter and tv news to quote and misquote King, a Nobel Peace Prize winner and national hero.

Despite the fame and awards, despite all the politicians who invoke his name, despite having a national holiday declared on his birthday, he was not a popular man during his lifetime.

Here’s how a Birmingham News cartoonist depicted him in the early 1960s: 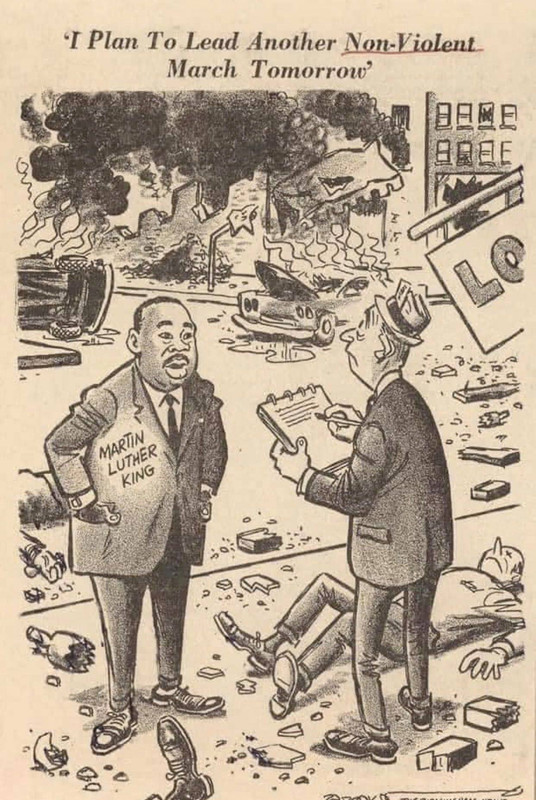 When he marched in Chicago, he met Confederate flag-waving counterprotesters. Someone threw a rock and hit him in the head.

By the time of his assassination in 1968, he had spoken out against racism, segregation, capitalism, and the Vietnam war. He came out in support of organized labor and basic minimum income. These positions left him with more enemies than friends - a 1966 Gallup poll indicated two thirds of Americans disapproved of him.

So it’s confusing to see his message reduced to a single, uncontroversial speech. It’s strange to hear his name spoken by politicians who almost certainly would have attacked him while he was alive.

It’s further evidence that you can’t control how your work is interpreted in your lifetime, and certainly not afterward. The best you can hope is to have enough of an impact that 50 years later, people are still trying to understand.